This is The ChangeUnderground for the 25th of April 2022.

It turns out an article I stumbled upon this last week is based on a three year old paper from the 2019 March edition of Quaternary Science Reviews entitled: Earth system impacts of the European arrival and Great Dying in the Americas after 1492. There’s a link in the show notes to the original paper.

From the conclusion to the article:

We conclude that the Great Dying of the Indigenous Peoples of the Americas led to the abandonment of enough cleared land in the Americas that the resulting terrestrial carbon uptake had a detectable impact on both atmospheric CO2 and global surface air temperatures in the two centuries prior to the Industrial Revolution.

The Great Dying refers to the loss of life in the Americas following European discovery of its existence. The authors reckoned on a death toll of 55 million people. That’s not to say 55 million individuals were shot, put to the sword or worked to death in mines and on plantations, though many were, the greatest loss of life appears to have been caused by the well developed and extensive trading networks spread across both continents and Central America.

As we are all well aware after the last two and half years, a novel infection can be deadly. Even a cursory look at the early spread of our current pandemic shows it flowing from the source to an area involved in trade with the People’s Republic. Milan, a city involved in the Chinese Belt and Road initiative was one of the first Italian cities to be overwhelmed. Given our interconnected world and its dependence upon Chinese manufactured goods, the spread was going to be and indeed was, almost universal. As we all should know by now, diseases travel from person to person. In the preindustrial world of post Columbian contact, this person to person spread was along and across trading networks which also collapsed. According to the article 90% of the population perished. This is a mind bogglingly large number to get our heads around.

But this had consequences beyond the political. As the article points out, the reforestation of such larger areas of the planet had a climate impact. A 0.15∘C drop in global mean temperatures which had effects upon all the globe. We look certain to blow past a ten fold larger increase in global mean temperatures and those effects are with us now. The worrying thing I took out of this article was the delay. Within a short time, a generation at most, the population dropped by 90%, agricultural land reforested and sucked CO2 out of the atmosphere but the effects of this weren’t felt until 1 to 2 centuries later.

Now I may be drawing a long bow on this but it would suggest to me that no matter what we do to reduce GHG levels in the atmosphere and there is much we must do, the effects won’t be felt for generations. We need to start taking mitigation actions now.

From an Australian point of view that means a couple of things. After the past two years of La Nina weather events and a possible third year coming, we need to move towns, villages and probably cities above flood plains. If you stand by a river and look at right angles to the bank you will see the floodplain, the flat bit beside the river. But if you look further you’ll see a rise and then another flat area. This is known as the secondary floodplain. The first being the primary floodplain. Sometimes you’ll see a third or tertiary floodplain too. We need to move habitation, permanent settlements above these levels. 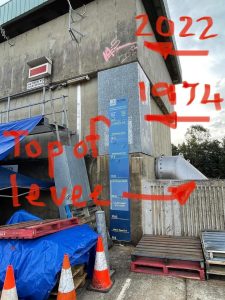 Cities like Lismore in northern NSW have been flood prone since they were settled. During 2022 it’s been flooded, to near record levels, twice, in a month. And we know in this wide brown land the next drought is already on its way. And if drought means anything nowadays it means bush fires. The fuel levels will be enormous after last year’s rains, the drought will turn this to tinder and we’ll be off to another bushfire season.

And this is not just pertinent to Australia. Australia has long been suggested as the canary in the coal mine, no pun intended but I’ll take it. That being said, we have several challenges.

Point 1 I think is unavoidable. The floods will keep coming and getting worse based upon current evidence. Point 2, I’ll concede is a little extreme but so too were the wildfires of 2019-2020. At the very least, earth covered structures should be mandated in peri urban areas. The forest/habitation interface is most dangerous. Yet fires still made it into townships and destroyed them. So a larger no flammable buffer area and different building codes adjacent to those areas will be a necessity. Using floodplains for food production rather than housing seems a no-brainer to me. So much excellent market garden soil around Sydney, in my lifetime, has been converted to housing and the food basket moved west of the Great Dividing Range. Changing the zoning to protect the growing areas from the property developers would put a stop to this.

The standard IPCC calls for an end to GHG production is, to mind, nothing all that radical. This is especially so now the effects of Climate Change are as obvious as per the latest IPCC report points out. This necessitates the electrification of everything. The quiet this would bring to the world would be worth the investment alone. And of course, the shortening of supply lines is a place where we can all start. From home veggie production to chooks, ducks and rabbits we can replace much of the road transport adding to GHGs. When we add in bananas from Peru and beans from Kenya and cut flowers from Ecuador as part of the supply chains for Europe and North America, shortening them will have positive effects upon CO2 levels. The people growing those products will need support to grow different crops or even work in different industries as their long distance markets dry up.

In the same way a country at war will realign its economy to a war footing, we need to transform the global economy to a Climate Change mitigation and reversal footing. Victory gardens, land armies and so on will be needed as the effects of climate change and the pandemic continue to impact supply lines. I’m not advocating for a fortress mentality but a pancake mentality. Closing borders, hoarding food and energy resources ultimately hurts everyone. Localised food production based upon a zero waste approach will see the nutrients returned to the soil rather than the current situation. At present, chemical inputs are poured onto soil, waterways are polluted, food is trucked to distribution warehouses and into supermarkets. From there it heads into homes, is consumed and the waste products disappear through the sewage system and, more often than not, out to sea. We are moving topsoil through this system from the land to the ocean and degrading both.

Start where we are and begin with what we have on hand. Plant, plant and then plant some more!

So if you’re not yet growing and would like some guidance, the discount is still on for the No-Dig garden Course over at World Organic News. It’s currently selling for $17 dollars not the usual $149 until the world starts to return to a little more normality.

So if you have been put off in the past, now is the time to jump in and learn. If you know anyone would be interested and the more people we can get growing the better, please let them know. I’ll have a link in the show notes or you can go to the World Organic News.com website and click the course tab. Please spread the word, we need to get as much food happening as possible as close to the people eating it as we can. The best time to move from consumption to production was probably 50 years ago, the second best time is now.