This is The ChangeUnderground for the 22nd of November 2021.

LONDON — It wasn’t quite the coming out party post-Brexit Britain had dreamed of.

The COP26 climate summit, long pitched by advocates in the British government as an opportunity to project the United Kingdom’s continued influence on the global stage, came to an emotional close last weekend with the U.K. hosts having done just about enough to get a pass mark, despite the best efforts of parts of the government.

This sums up the problem with these global events. As much about show as they are about results and still the weather changes to more extremes such that we can discern the changes in climate.

As a bonus, the post brexit collapse continues. The triumph of slogans over reality. Yet reality always returns. The Empire is over, despite the sycophantic behaviours of our antipodean conservatives, and that reality is starting to bite. Transport shortages, fruit rotting in fields and a PM whose grip on that reality can best be described as post-truth. A fitting setting for an epoc defining COP meeting. This is a time for individual action, for growing our own not for setting up gallows outside state parliaments, not for demanding a reaffirmation of me, me, me and my rights, but a time for genuine, food production and distribution revolution. As I say, start by growing your own food.

Having vented my spleen, to this week’s fare.

I’ve stumbled upon a Korean system that utilises ultra low cost inputs. This got me to thinking about chemical farming input costs. I’ve mentioned before that I’d heard in a podcast that many US corn farmers are, in effect, planting $800,000 in the hope of getting back $850,000 at harvest. Then back in October I heard Marshall Roberts on the Tasmanian Country Hour. The story entitled: No fertiliser and no hay making but still plenty of grass for the cattle. As seems the way with these things, a crisis triggered a change. The story was about the open day Marshall had run on his farm. The upshot was his peers liked what they saw but a few had trouble believing he had so much feed without spreading fertiliser. The jump was just too much to comprend. The inertia of ideas believed to be true can be very powerful even when confronted with evidence to the contrary.

Clearly there are as many ways to work with Nature as there are people working with, against and alongside Nature. 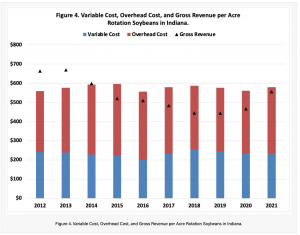 I’ve located a costing table for Corn/Soybean production in the US. The pinnacle, perhaps, nadir, of the chemical paradigm. This is a little frightening. There will always be costs. By utilising photosynthesis and animals to convert water, sunshine and CO2 into soil, less area is available to grow cereals. This might not be a bad thing. It diversifies the income streams, allows flexibility in response to climatic conditions and reduces input costs significantly. The costs per acre have outstripped the profit per acre since 2014 when the costs equaled the profits. So even if the return was halved by not using the chemical inputs, farms would have been profitable. The inertia of ag systems though is a formidable thing.

As I discussed back in Episode 260. Small Scale Grain Growing, the technology of the original domesticating culture matters. To refresh, wheat, rice, sorghum and their ilk we domesticated within a wheeled society. The grains require much labour to remove them from their seed heads. They were “improved”through the use of ploughs, straight lines, division of labour and so on. Maize was domesticated within a cultural framework that did not involve wheeled carts, ploughs and so on. It was made to fit that system with machinery and so on from the 19th century. The origin story though is important.

“JADAM is a group of organic farmers”

As agro-corporations gain more control over the knowledge and technology of farming, farming becomes more and more expensive. This is a common problem faced by the farmers of the world as a whole. This is the reason why agriculture is collapsing everywhere. JADAM’s ultra-low cost farming method will liberate agriculture from the corporations and bring hope for the farmers.

Let’s unpack this. Can you think of a time since WW2 when tractors have become smaller, not larger? Can you think of a time when the push from governments was for smaller farmers? I am discounting the land distribution movements which can best be viewed as blips on the continuum towards big. Righteous as most are, they tend to end in the leader’s death, some political smoke and mirror work and a return to growing agglomerations.

To be fair, a large number of South Korean farms are smallish, not dislike their Japanese neighbours. I’m all in favour of this scale, as a rule. I’ve included a link to Journey to Forever: Small farms where the many benefits of this farming size are discussed. More trees, greater biodiversity, animal integrations and the other good things I’ve been advocating for since this pod began.

The developers of the JADAM system also point out its applicability to large farms too.

The great benefit, as I see it, is the massive reduction in input costs and increased returns as the system passes muster under organic certification. The organic premium is an added bonus. All amendments, sprays and fertilisers are produced on farm as a fraction of the cost of purchased items. Hand in hand with is the drive towards appropriate technology. An emphasis on no-dig gardens and a minimum of tractor based machinery.

As the ABC story earlier and the JADAM system show clearly, low input farming is surprisingly easy. The biggest change needed is in mindset.

By example, let’s change people’s mindsets by growing as much of our own food as possible. Let’s show them what can be done. We only need to convince one of ten to move from consumption to production to hit the Bill Mollison tipping point.

If you’re ready to make the leap into growing your own food in an integrated animal supporting/supported way go to the website: https://worldorganicnews.com/freeebook/ and you can obtain a free copy of The ChangeUnderground No-Dig Gardening System.

And don’t forget the Facebook Group: ChangeUndergound Podcast Group where I see we have rocketed up to 12 members. Slowly, slowly is how exponential growth begins.

JADAM is a group of organic farmers