This is The ChangeUnderground for the 6th of December 2021.

It has been rightly said that prediction is a difficult business, especially about the future. But let’s not worry too much about that.

There are things occurring in this world that raise concerns. Fear not dear listener, this not about the illuminati nor any other conspiracy theory. Today I wish to look with cold reason upon some price changes over the last six months or so, commodity production figures and some near term climate forecasts. So with the ground rules established, let’s dive in.

As I discussed back in episode 279, Cuba suffered a sudden loss of chemical fertilisers after the collapse of the Soviet Union. They also lost their oil imports too, a double blow to the economy. They worked their way through that disaster to become masters of vermiculture and able to feed themselves at the same time.

Why do I bring this up? Well fertiliser prices may be having the same effect, if not in scale but in character. From the Chemical and Engineers News is a graph showing anhydrous ammonia, a nitrogen fertiliser, rising in price from just over $500 a tonne on January 14 2021 to somewhat north of $1300 a tonne on November 4 2021. A roughly 260% increase in cost to the farmer. In the EU farm fuel costs have risen 174% this year and fertiliser prices by 37.8%. And the World BanK Blog shows different fertilizers at near record highs. The last time prices were higher was in the wake of the Global Financial Crisis of 2007/008.

This led, not surprisingly, to food riots across the developing world.

In 2007 and 2008, world food prices jumped rapidly. It primarily affected staple commodity grains such as rice, wheat, corn, and soybeans, which left the poor in many countries vulnerable.

And from the website: Trading economics we have a graph showing the wheat price rising from just US$500 per bushel to US$799 per bushel. All these graphs are available for viewing over at the website under episode 281 along with the transcript. 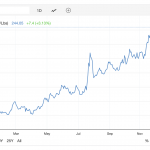 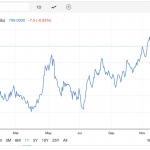 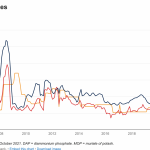 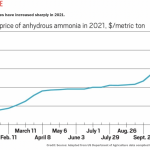 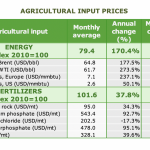 So we have a situation across the globe where several factors are colliding: rising fertiliser prices, as discussed back in episode 279 because of rising natural gas prices, rising food prices as exemplified by the wheat price which will in all likelihood transform into higher food prices.

Here in Australia, after decades of on again, off again but mostly on again droughts, this year looked good for wheat farmers. Rain on both sides of the continent, droughts in the northern hemisphere restricting supply and rising prices. I say it looked good because flooding rains in October and November have destroyed the quality of much of the harvest which is in progress. The effect will be to lower returns to many growers, lower the price of feed wheat and further restrict the supply of wheat for bread, pasta and beer production across the globe.

It’s not just staples. The coffee price has risen from under US$120 per pound to US$244 per pound this year. All this data is pointing in one direction. Rises in the cost of food for consumers. And when I say consumers, I mean people. Remember the old story. You need a lawyer a few times in your life, a preacher not many more but a farmer three times a day. Two if things are crook and one if the ship hits the sand bar.

Nowadays famines caused by crop failures are rare. Nearly all have a political element. Think Yemen today, Bengal during WW2, Ukraine during the 1920s and so on. The Live Aid appeal to meet an African famine raised plenty of money but I recall hearing the Geldolf kiddie complaining that lack of roads and trucks were the biggest problem once the food started to flow.

Now in the developed world there will be some indulged precocious child somewhere for whom Christmas will have been ruined because a particular gadget didn’t arrive in time from China or Vietnam or Bangladesh or wherever because the world is in a supply chain crisis.

From Business Insider Australia come a piece entitled: Where the supply-chain crisis came from, where it’s going, and when it will be over

Supply-chain disruption started more than a year ago as governments’ and corporations’ responses to COVID-19 created a million small interruptions. That combined with exploding consumer demand is a recipe for a transportation bottleneck in the form of port backlogs that created the famous line of cargo ships off the California coast.

As importers try to shove more goods through that bottleneck, it gets worse. The backlog and the mess of factory closures, labor issues, and equipment shortages behind it has been deemed the “everything shortage” or the “supply-chain crisis.”

And this is mostly about things. Imagine what’s likely to occur once food staples are held up in the bottlenecks.

Add to this a labour shortage in the supply chain. The UK running out of truck drivers is a good example. Now there’s a Brexit effect in that. It turns out when you toss Johnny Foreigner out Tommy won’t always do the crapper jobs that are no longer filled. Who’d have thunk it?

Anyway I believe as a long term reader of history, even though my degree is in archaeology, that more is afoot. From ourworldindata.org/coronavirus-data reported cases worldwide sit at 265 million and reported deaths at 5.25 million. I suspect that these figures are a large under estimate but my hypothesis still holds at these levels. The deaths are being reflected in the loss of people in the supply chain from farmers and factories to homes. When the Black Death swept through Europe with an admittedly much higher fatality rate upwards of 40% and maybe even 70%, societies underwent dislocations and reorderings. We are nowhere near the same level of loss, thankfully but the effects are still rippling through the world’s societies as we are still dealing with the continuing pandemic.

An MI5 report as quoted in the HuffPost of 17th August 2011 suggests that the UK is only four missed meals from anarchy. The idea of ships full of food sitting outside harbours as the inhabitants of those harbour cities riot due to food shortages is not the future we need.

Altogether not the rosiest of word pictures I’ve ever painted but one I think we need to face.

Time I think for the Bill Mollison 10% to move from consumption to production rule to kick in. In the Southern Hemisphere next winter looks like a time to watch and in the North, that depends upon Russian gas supplies, Ukrainian wheat production and the actions of the Chinese Communist Party. Africa is such a mixed bag of possibilities that I’m unwilling to even guess.

Not surprisingly I would suggest we all grow as much of our own food as you can. The Cubans came through their hungry years with a better system and, I suspect, healthier people. We can too, we can even avoid the hungry years if we shorten our supply lines, speak to our neighbours, join community gardens, start an allotment, plant a window box, anything really just start.

And you know the drill. If you need help there’s the free ebook at the World Organic News website and the No Dig gardening course is there too. Links in the show notes.

Learning from the 2008 food crisis: what happened, lessons learned, and ongoing consequences

Where the supply-chain crisis came from, where it’s going, and when it will be over