This is The ChangeUnderground for the 19th of September 2021.

A big shout out and thank you to Kaelem for the coffees he tossed my way on the “buy Me a Coffee” link on the website. Much appreciated as were your kind words on episode 266.

Now to today’s matters. Who owns the world’s seeds? Who indeed. Way back in 1980, which is an odd thing to say having lived through that year but I digress, bat in 1980 the US patents office approved a patent for a biological entity, a bacterium. This one ate oil spills or some such thing. This opened the floodgates and before you knew it the Monsantos of the world had piled in.

What’s going on? Patents have been issued on things like roundup resistant corn, as an example. This has a few implications.

All this meant a triple income from each seed sale. The profits from the seeds themselves, the Roundup and the fertilizers all went back to Monsanto before they were bought out by Bayer.

Then they realised (?) hoped for pollen drift to neighbours of the GMO growers. Having been granted a patent for their roundup ready corn, this pollen drift was deemed by Monsanto and the courts to be an unauthorised use of the patented material. Many farmers were bankrupted because someone else’s actions led to their corn being contaminated. The perversity is gobsmacking.

A remedy in law was developed that required the affected farmers to get in first. This meant continual testing of their corn but once the GMO was detected a “cease and desist’ letter was sent to Monsanto demanding they remove their unwanted product at their expense.

But do we really need to patent seeds? It is nothing but a time limited monopoly for the biotech firm to print money. If the patent didn’t exist what would have likely happened?

Not much different except other companies would have produced glyphosate based herbicides as they do now that it’s off patent. The seeds, if as good as the marketing stated, would have dominated the marketplace anyway. So less profit but probably the same market share.

This is a disappointing realisation for your narrator. I’ll explain. 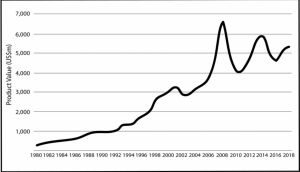 The nature of the political economy following WW2 was that of Communism versus Capitalism. That process and the memory of the 1930s depression kept rampant laissez faire capitalism in check until the fall of the Berlin Wall 1989. By then the collective lunacies of the Thatcher/Reagan “reforms” had become entrenched. The graph on the transcript over at World Organic News dot com slash episode270 show how the rate of usage increased until about 2008 when the financial crisis hit and peaked again from 2010 to 2016. After that legal actions might have had an effect but the trend is again upward.

The point I’m trying to make is this: given the commercial background, the political milieu and the triumph over communism, the industrialisation of agriculture has created a set of seeds that do ok under glyphosate, chemical fertilizers and irrigation. This can be considered the recipe approach to farming, well cropping. The calculated inputs, from a series of soil tests are provided by the seed/herbicide/fertiliser manufacturer each year. The timings of each are prescribed and a commodity is collected at the end of the season. I can’t remember where I heard this, maybe an interview with Gabe Brown, maybe another cover crop pod but things in the US are now at a point where a farmer will commit $800,000 at the start of the season in the hope of harvesting $850,000. The weather still intervenes and will do so more obviously in the future as the concentrations of GHGs increases but I think we can take that as read for the podcast feed. So government backed crop insurance covers the weather risk.

As we have lived through the current human pandemic and seen variations in the effects of the SARS CoV-2 virus because of gigantic variations with the human population, consider what a malignant corn virus would do to a crop that is essentially genetically identical across the US corn belt.

It is not a comforting form of risk management to know that insurance will cover the grower but the consumer is left hung out to dry. Every nation state on earth is at best nine missed meals from rioting and revolution. Just reflect on the whoha over toilet paper.

No, we need a better system. It seems unlikely we can end the patenting of life. Mind you the swiftness of same sex marriage rights proliferating across the democracies of the world does give me hope of change in other areas too. The 100 monkeys thing I discussed back in episode 189 might be at play.

In the meantime we need to seize control of seeds ourselves. There are sufficient people out there who have hung onto older varieties of seed, who saw the crunch coming or who just cherished the crunch of a particular variety of carrot.

Many community gardens across this wide brown land are into seed saving and distribution. Seeds are best kept growing. This comes with risk, obviously. A prolonged heat wave and all the seeds distributed for growing and return can be lost.

At a “higher” level are organisations like the Organic Seed Alliance in the US. (Link in the show notes) does much more than save and distribute seeds. They link local seed savers, run conferences, advocate for open pollinated seeds and farmers and gardeners saving seed.

This is doable at all levels. Last week at work we planted seeds from purple king beans we grew last summer. These went into the polytunnel and we might manage another planting from these out in the open air garden later in the summer. Each planting, growing and harvest adjusts the seed genetic profile to the local conditions. Eventually new varieties are possible but not essential.

For those who don’t know, I work at a disability support organisation and we are now running two programs in the Horticulture area at work. Tuesdays and Fridays are a good separation that allows watering on a consistent basis. The enthusiasm of the new group on Fridays has bled into the Tuesday group. Both can see what the other has achieved in a six hour day and there’s a sense of developing friendly competition. We will see. The changes occurring are inspiring for me too. I’ll take some pics over the next few weeks to show the changes the… hmmm I’m loath to call these people clients or service users, it’s much like working on the field pieces of my early adulthood. These people, with various diagnoses and life experiences are coming together as two teams. Tuesday’s group knows the routine and things just start after the cuppa tea we begin the day with. Friday’s group is only two weeks in but individuals are stepping up. Doing what they see needs to be done. It moves my heart to see the enthusiasm and the outcomes they’re achieving.

Back on topic. If you’re using seeds, rather than seedlings, please consider open pollinated types rather than hybrid. For a full explanation of seed types see the video: “Heirloom Seeds”: https://vimeo.com/398922532 link in the show notes.

There’s plenty of material on seed saving out there in the wilds of the interwebs. The process can be a bit fiddly for some seed types but dead easy for others and there is deep satisfaction in continuing the cycle of life.

And if you’re thinking about or even ready to make the leap into growing go to the website: https://worldorganicnews.com/freeebook/ and you can obtain a free copy of The ChangeUnderground No-Dig Gardening System.

If you have any questions, thoughts or suggestions there’s the ChangeUnderground Podcast Group on Facebook. You can search the Book of Faces or there’s a link in the show notes and in the transcript over at WorldOrganicNews.com/episode270.

Biological patents in the United States